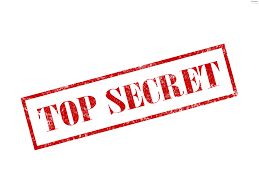 e have so many words, how on earth could one be lost? What sort of word was it? An audible or spoken word, a magic spell of some sort? Something meaningful, powerful for sure. Since antiquity, mystics, philosophers and occultists have been searching for this secret word. Is it really lost or just obscured? Maybe so patently obvious we can't see it. The Masons claim they once had possession of this Word: According to the legend of building Solomon's Temple, there were three secret parts held by three initiates. Each knew only one of the three components.

Symbols can be very powerful, they often trigger latent totems held deep in our consciousness. A sign is inert, it is illogical to be frightened by any sign. In the 1980’s, this original logo for the company Procter and Gamble was thought to be satanic! Mass public hysteria over this beautiful old trademark grew to such a fever pitch the company was forced to abandon it. But only by way of signs and symbols are we able to understand higher meanings and connotations. Words are too clumsy. The very first ideas were expressed this simple way, beginning with how to convey the thought of a Creator.

Long before hardened, crystallized forms of religion was the Way, called TAO. Greatest was TAO said the ancient masters of the east. All-powerful, no manifesting form has TAO, no beginning or end. Even the name TAO is less than TAO.

Like a dividing cell, TAO the One became two, duality: Yin and yang. Dark and light, male and female. Opposite poles are necessary for creation to happen. The two became three, a trinity of forms. The three became seven: 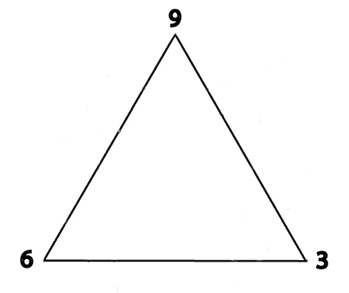 "Let us create man in our image, after our likeness." The Seven Spirits of the Elohim: Powerful rays of creative thought: Light, color and sound all projected down through the seven planes of existence. The Elohim reappear in the Book of Revelation, as the Seven Lamps standing before the throne of God.

Zayin. Seventh letter in the Hebrew alphabet. Seven is a prime, the perfect number. There are seven words in the opening line of Genesis; seven creative days; seven colors seen in the spectrum; seven notes in the music scale (plus an octave).

The Lord said, "I am the vine and you are the branches." What vine did he mean? The DNA vine of evolution. The Lord also told us, "Know ye not ye are gods?"

This was the true message of Christ: Our unrealized potential as children, created and loved by a powerful Central Intelligence. We are souls, each of us begotten of this All-Person. Jesus called it Our Father. All living things in creation are slowly climbing this Vine, an arduous upward trek. In order to advance higher we need to find the Lost Word: The verb to be.

I AM. His Name is our name too! We say it every day, and each time we say I am we decide who we are. Be it well or ill. It's up to you. The I AM, or AUM is not a noun, but a verb: In everything there is perpetual motion- positive, negative and neutral energies.

The lost word is really a missed opportunity. We have philosophers, theologians and scientists but we are paupers in wisdom! We cannot recognize the only thing that matters most because it means reducing complex ideas to the simple truth. Aleph is the first letter in the Hebrew alphabet. I AM the Aleph. Your wish is my command!

The Magus: First card of the Tarot. We have the same the ability as our Creator to call into being whatever we desire. But man is an infant soul, a virgin spirit early in his evolution. Like a child, he knows only what he wants, so his magic is squandered. We have little to show for this power, not until we learn to use it unselfishly to benefit humanity.

For eons, unseen highly evolved elder souls have been striving with our race, to teach and uplift man from his base instincts to his birthright of consciousness. The majority of humans are evolving slowly, but others are evolving quickly by rediscovering our ancestral religions. The Magians, or magicians traveled from Persia seeking a king by following his Star in the night sky: They were wise men.

The Pearl of Great Price.

A woman's jewelry box is her prized possession. She delights in its contents, these her treasured keepsakes. She knows if one is missing. Indeed, one is not there! Not a ruby, emerald or jade for these are mere trinkets. Missing is the one stone worth selling all else for! Where did it go? It was rejected as unimportant, of no value, never cherished or guarded. It is lost, and humanity is lost without it. But it was not always so.

Every civilization has been given this idea, this precious stone. It is wisdom! But in each of these societies only the most advanced thinkers understood its importance. The highest of these in the historical period were the ancient Greeks. The Oracle at Delphi said, Man, know thyself!

Σοφία or Sophia is a female name derived from σοφία, the Greek word for Wisdom. Sophiology is a philosophy central to Hellenism, Platonism, Gnosticism, Esotericism and Mystical Christianity.

"Wisdom hath builded her house, she hath hewn out her seven pillars. She hath sent forth her maidens who crieth upon the highest places of the city: Whoso is simple turn here, who wanteth understanding, let him come. Forsake the foolish and live, go the way of understanding. The fear of the Lord is the beginning of wisdom, and knowledge of the holy is understanding. For by me thy days shall be multiplied, and the years of thy life shall be increased." - Proverbs 9.

Hear O Israel, the Lord thy God is One!

The Great Law. From the Shema, Deuteronomy 6:4, 5. Christ adds an addendum: The Golden Rule. Together we have, "Love the Lord thy God with all your heart, soul and strength; and love thy neighbor as thyself."  (cf. Matthew 22:37-39).

Who in the world has never heard that? An axiom so simple a child can understand! Yet with all the knowledge acquired by man, he still must go back to school and learn the Golden Rule: The only path to  universal brotherhood. There will be no future age of peace on earth until we comply with the Great Law. But man abhors authority. His foundations collapse, his institutions are insolvent, his best efforts impotent. For some strange reason he simply resists doing what is right for the welfare of all humanity.

The Architect of your life is you. The tools given to you by God are symbols in masonry, but you don't need to be a stone mason to understand this craft. The square and compasses are familiar. But Freemasonry is not a secret, it's a plan for every man to design his own inner temple after the order of Solomon's Temple: The great shrine is long gone, but still remains an archetypal plan for the construction of a life of integrity, fidelity, charity, brotherhood and faith in the Creator.

Here is an opportunity to build square, level and plumb. The Operative Mason is brick and stone work, his crude and simple tools are really the symbols for the man who desires to be a better man, to do the hard work necessary to build an exemplary life brick by brick: A proper dwelling place for his spirit. This is the true philosophy of Freemasonry.

The truncated pyramid on the reverse side of our one-dollar bill is not a sinister sign at all! It simply represents an unfinished work, as the All-Seeing Eye is vigilant, watching over the difficult construction of a perfectly ordered society. This was the Vision of our Founding Founders: The lost, secret word was always right there. 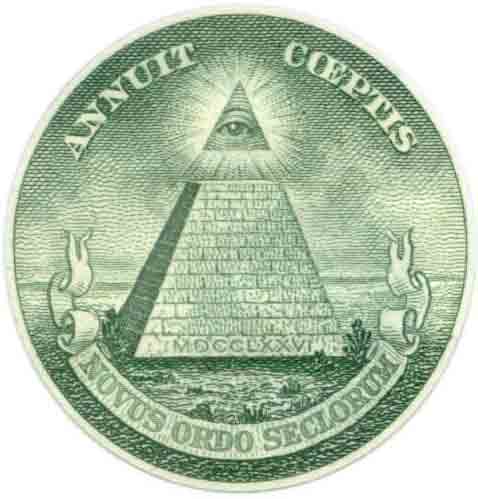