What is the Audible Life Stream?

Baba Sawan Singh (1858–1948), also known as "The Great Master" was an Indian Saint, the second Satguru of Radha Soami Satsang Beas (RSSB) from the death of Baba Jaimal Singh in 1903 until his own death on April 2, 1948. (His master and predecessor was Sant Kirpal Singh, who received the transfer of power).

Shabd is the sound current vibrating in all creation. It can be heard by the inner ear. Variously referred to as the Audible Life Stream or the Word. Surat Shabd Yoga arose in India in the last several hundred years, specifically in the Sikh tradition founded by Guru Nanak. Surat Shabda Yoga is also known as Sehaj Yoga– the path leading to Sehaj or equipoise; the Path of Light and Sound, the Journey of the Soul, the Yoga of the Sound Current also called Sant Mat.

सूरत Surat. Surat Shabd Yoga is a type of yoga in the Sant Mat tradition. Surat means "attention or face," that is, an outward expression of the soul. Shabd or Shabda has multiple meanings including ‘sacred song’, ‘word’, ‘voice’, ‘hymn’, ‘verse’, or ‘sound current, ‘audible life stream’ The essence of the Absolute Supreme Being.

Yoga means "union," or to yoke. Surat Shabd Yoga means the union of the soul with the essence of the Absolute Supreme Being. This type of yoga is connecting one’s soul or attention, Surat with the inner Current of Light and Sound of God- called the Shabd.

This Sound Current cannot be heard by the uninitiated. A Satguru, meaning a true guru or superior teacher, is not just a person who feels like working in the role of a guru. He must be competent to impart initiation, a sort of powerful jump-start giving the aspirant a bit of earnest to work with. This blessing is given to seekers only by discretion of the master who sees the heart and decides.  The lovely inner tones then become audible, like the sound of a tuning fork. The music of the spheres, an irresistible siren leading us back home.

The Teachings of the Sants, (saints); the Way of the Saints. The term Sant is pivotal, derived from the Sanskrit sat सत (true, real, honest, right). Its root meaning is "one who knows (is) the truth." Contemporary Sat Mat movements assert that the Master or guru is provided by God as the channel through which God manifests in the world. Since God is invisible and inconceivable, he sends messengers at various times to guide humanity back to Him. Teachers of Sant Mat claim to teach a spiritual path which is intentionally easier than other disciplines.

Sant Mat in the West.

Sant Kirpal Singh (1894-1974), a contemporary Satguru, made three tours to the United States during his life. Master says,

"Masters want to take us into an entirely different world; and when you ascend above the body, you will yourself experience that audible Sound. A certain Saint says that the Sound, which is the God Power, the Christ Power, the Guru Power, is telling us to, “Come children; He is awaiting us above. It is there, awaiting us, and is apparent in the form of Light, audible in the form of Sound, and leads the soul to its Source, where all is a wordless state." 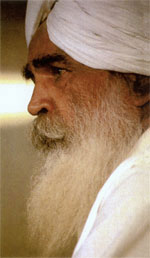 Since the beginning of creation, when the first flicker of self-awakening dawned on man, his attention has been more and more concerned with the problem of his own worldly existence and the investigation into the cause and source of all creation. For ages, he has probed and queried in vain, but now, at last, his increasing thirst for knowledge is turning him to study the results achieved by others in the field.

Ancient and modern sages asked, "What is that, the knowledge of which makes everything else known?" and in the same breath replied, "Knowledge of the higher self – the true man." So the supreme knowledge is that which deals, both in theory and practice, with man's true nature and his relation to God. It is, in fact, a natural science without a hypothesis, subject neither to change nor time. In ancient India it was called 'Para-Vidya' (science of realized truth or science of the beyond) and different denominations sprang up to interpret this knowledge. The term 'Apra-Vidya', standing for preparation for achieving the knowledge of 'Para-Vidya', was then introduced. This preparation consists of following an ethical and moral life, and the practice of concentration or meditation (in so many ways) both being indispensable for spiritual development.

Man is constantly changing or introducing new names and terminologies to describe this science. The Masters were called Sants, and the nature of knowledge Mat, thus giving us the term 'Sant-Mat', which is at present mostly used to name the path of the Masters. Other terms, such as Shabd Yoga, Surat Shabd Yoga, Sehaj Yoga, are also used to describe the same science. In the Sanskrit language, the word 'Sant' means Master of the highest order, and 'Mat' is a confirmed opinion or statement made by an adept after personal experience. The foundation of this science, therefore, is the result of a critical study, minute investigation, and the lifelong personal verification of facts based on practical experience of the self in man. This experience of the self is something that a competent Master is prepared to give to each individual who approaches him. Sant Mat, therefore, is the teaching, system and path of the Saints.

The Masters do not attach any importance to names, designations, or the fact that many religious sects, groups and circles, have claimed this science as their own and named it after their leaders or founders. They look upon these groups as schools where man – the noblest being in creation – can study with other men as children of one and the same almighty father. A Master (also called Sant Satguru), has complete mastery of both the theory and practice, and is competent to impart both knowledge and experience to all sincere seekers after truth, without any distinction whatsoever of colour, caste or creed. Any man or woman, whether rich or poor, young or old, sage or sinner, learned or unlearned, who is able to grasp the theory of the Science, has a right to acquire this knowledge.

The 20th century religion Eckankar is a contemporary, western style version of Sant Mat. It's founder, Sri Paul Twitchell was initiated by Kirpal Singh. Eckankar is modeled after the original surat shabd yoga: The path of the light and sound current.

The Movement of Spiritual Inner Awareness, founded in America in 1971 by John-Roger with students in thirty-two countries, also teaches a similar form of active meditation called spiritual exercises. This movement uses the Sound Current and ancient Sanskrit tones in order to traverse and return to the higher realms of Spirit and into God.

NAAM. "Word." This Word is the same as described in many traditions, many religions. The following expressions are interpreted as being identical to Naam:

Excerpts from the Bible, examples of Naam, or the Word.

“And they were astonished at his doctrine for his Word was with power.” Luke 4 : 32.
“Now ye are clean through the Word which I have spoken unto you,