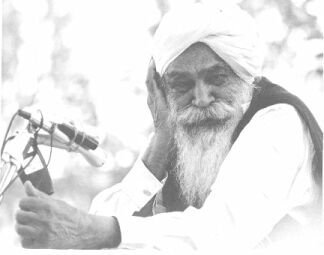 Sat: "Truth." Kirpal Singh was a Satguru: A title given only to an enlightened saint, or Sant with qualities not found in other types of guru. The terms Sant and Satguru first came into existence from the ideology of Kabir in the 15th century.

"If you wish to love God truly in the most practical way, it is to love our fellow beings and feel for others in the same way as we feel for our dear ones. Instead of seeing faults in others, we look within ourselves, suffer in the sufferings of others and feel happy in the happiness of others. Endure all that comes, cheerfully accepting as His Will, and do not hurt or harm any of His beings."   - Kirpal Singh

"During my last foreign tour I was asked on television in the United States, "How can peace be cemented?" I told them, "Peace can be cemented only when men rise above 'isms.'

I was most fortunate to see Master in Philadelphia forty-five years ago. In 1972, I was invited by friends to the Warwick Hotel to see a guru from India touring the west. I suppose I was a seeker, but I wasn't much interested in gurus or even religion for that matter, just a bored college student looking for answers. So I went.

The ballroom was crowded with his devotees. I could not even make out the words he spoke, but at one point I thought he was looking at me, a gaze so piercing I had to turn away. I didn't understand any of it. What was a master anyway? All I saw was a man with a beard wearing a turban. When the strange affair ended we left the Warwick and I thought little of it. I never saw him again.

Somehow he noticed me in that crowd: Soon after I received a sudden bolt of terrific power from within! I was never the same. I knew there was God and God knows who I am. He knows who you are too.

Master left his body two years later in 1974. Even after all these years there is still much I don't know about him. We are privileged to have his images, writings and recordings preserved on internet sites devoted to this enlightened Sant, or Satguru.    (See post: "The Orient Express").

"The Master’s strong and protective arms and His loving vigilant eyes are always on His fold. He is for their progress. When outer difficulties seem hard, His inner grace increases." (Spiritual Elixir, 102)

A talk given by Sant Kirpal Singh, Christmas, 1963.

God-Power appears from time to time at the human pole to guide the child-humanity back to God. The question is: Who can give us the way back to God? No son of man can do it. God alone gives us contact with Him. He has no equal; no brother, no father, no mother; and that God resides in every heart. Do you follow now, how great He was? He was this God-Power manifest at the human pole, but he always differentiated between the son of man and the Father in Him. Other Masters, Guru Nanak and Kabir, expounded this same Truth in their own languages

Because we are not aware of the teachings of other Masters, we may think perhaps the words of Jesus are the only truth. However, Truth is One. Truth is clothed in Light, the music of all harmonies. Masters in the past referred to it. The Sikh Scriptures contain the same assertion: "The Word was made flesh and dwelt among us."  They said the Word was personified in human form and guided the embodied soul giving it contact with God. I have respect for all human poles at which that Christ-Power dwells from time to time.

Do you comprehend ? God-Power, Christ-Power or Guru-Power is the same, and manifests Itself at the human pole to meet the demands of His children: those who feel hungry for Him, those who feel thirsty for Him. There is food for the hungry and water for the thirsty; demand and supply is the law of nature, and where fire burns, oxygen comes to help. When man has hunger for God in his heart, God manifests Himself at some human pole to guide the child-humanity. "No man knows the Father except through the Son and he to whom the Son reveals Him."

Jesus said: "Except a man be born again he cannot see the Kingdom of God. The Kingdom cometh not with observation but is within you." By observation is meant the outgoing faculties. God is Spirit and we must pray to God in Spirit alone. God does not reside in temples made by man, but in the God-made temple of man. Jesus said: "Because I live, ye shall live also." He was not referring to the outer son of man but to the inner, which gives Light and the Way back to God through Love. Jesus clearly said that no man knows the Father except the Son, and the one to whom the Son reveals Him. That Son, the Light of God exists forever.

Son-ship continues. The sum of all that I have to convey to you is that Christ lived as the Man-body of Jesus, at whose pole He appeared, and that He resides in every heart. Yet He cannot be realized by mere feelings, emotions, drawing inferences, or intellectual wrestling to arrive at a conclusion. It is a matter of seeing God, Who He Is. Christ said, "I am the Light of the World." Can you see this Light? He went on to say, "The Light of the body is the eye: If thine eye be single, thy whole body shall be full of Light."

There were few such Personalities in the past, and even now there are few but the world is not without Them. All humanity are the children of these Masters. This same God-Power has been working ever since the world began, and continues for those who are hungry and seek the Truth. God, Who resides in every heart, makes arrangements to bring that person to wherever they can be duly contacted with the true Self.

The true definition of a Master given by all Masters, is One Who can make audible for you the music of the spheres and remove the veil of darkness you see when you close your eyes to reveal the Light of God. Such a person is called a Master.

We have regard for that perpetual Christ-Power which existed before his birth and continues after it. Son-ship is perpetual. That power lies in every heart and is revealed when a human pole at which the Power is manifest, meets us and gives us a contact with God. When we meet them, Masters are competent to raise our souls from the bondage of the mind and the outgoing faculties, and give us contact within. Such human poles which give us that Christ-Power come from time to time. We are then, fortunate to be gathered here on this blessed Christmas. 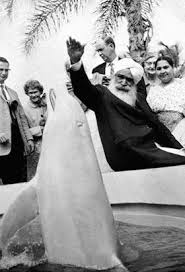 The Masters do not destroy any religion or introduce new ones. When They come, They come for the whole world. They consider all humans alike and want us to unravel this mystery of the Man-body. Great is man. He lives in this body in which God controls him; and within the microcosm of it, exists the macrocosm. We know so much about the outer subjects but, for want of practical people, we know little or nothing about ourselves. This is the great boon, the blessing we have in the form of the Man-body. A Golden Opportunity.

I have had the great pleasure to present for your consideration this Christmas Night, truths which I have come to know through experience and by study of comparative religion.