Called by so many names, yet there is only One All-Being. Written from right to left, notice the opening line of Genesis contains at the center Aleph/ Tav: The first and last letters of the Hebrew alphabet. In Greek it's

. Jesus said, "I am the Alpha and Omega:" The beginning and the end. 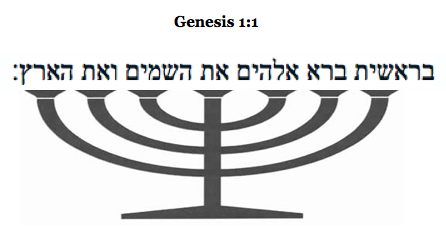 "In the beginning את created the heaven and earth."

od is because He does. His Plan is already and not yet- always moving forward, refining and upgrading to better things, leaving the old behind. Sentimental God is not. His thoughts are far ahead of us, we cannot comprehend. His works are new each day, His goodness coming in surprising ways with things unexpected. He is not detached at all, but broods over the Creation with the temperament of an Artist.

"When will you make an end?" asked the Pontiff. "When I'm finished!"

"The Agony and the Ecstasy," by Irving Stone is the story of Michelangelo painting the ceiling of the Sistine Chapel: The enormous fresco of the Bible, a masterpiece. He was reluctant to take the commission, saying he wasn't a painter but a sculptor. He lay on his back on scaffolding painting into wet plaster before it set. The work was backbreaking and grueling, with a few apprentices to help. Unsatisfied with the initial results, he kept scraping out what he saw as mediocre. Beginning over again, laboring and driven towards perfection- like the Creator Himself. 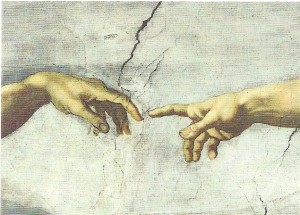 Michelangelo, "The Creation of Adam." (Detail from the fresco).

Give me a Name.

From a burning bush the All-Being spoke to Moses, flustered by the daunting task given him. Ex. 3:1-16. Moses answered, "Who am I that should go to Pharaoh and lead the Children of Israel out of Egypt? They will say, the God of our fathers? What is his name?"

This is my Name forever, a memorial unto all generations. Go and tell them...

No gender has God. Because I AM is a verb, it is motion- positive, or "male." God is the Light of Intelligence- Eternal Mind: He is Self-Existent and never ceases to Be. He needs nothing, the entire universe is His House. He is the Source of all things manifest. Being unseen and without manifest, the only way to know about Him was through signs and symbols. His desire is to make Himself known to man, created in His Image. The disclosure of the All-Being happened gradually, through dispensations and chosen vessels. Seeing the suffering of mankind, in due time He sent a reproduction of His Person.

The Bible is a book basically about one thing: Jesus Christ. Otherwise there is no story to tell, no need for the prophets. In Bible times copies of the scriptures were rare and cherished. The law and prophets were studied by learned rabbis and read orally in synagogues. Following the Babylonian captivity, expectations grew of the coming of a messiah, a great deliverer. The prophets, particularly Isaiah, contained such veiled predictions. But the wait seemed very long, and many are still waiting.

Delivered from what exactly? Not from gentile oppression as was expected by the Jews, but from ourselves. To undo the damage from our mistakes. The word "sin" literally means you missed the target. Off-center. No bull's eye.

Elohim. Who is Us? "Let us create man in our image, after our likeness." The Seven Spirits of the Elohim are powerful projection lenses of creative manifestation: Light, sound and color. They are seen again in the Book of Revelation: The Seven Lamps standing before the Throne of God.

Thesis + Antithesis = Synthesis.   "...male and female created he them."

"The man has become as one of us, he knows duality." Why does God allow evil? Without polarity nothing can be created; a thing must have its opposite to define it. God separated light from darkness, but once man discovered the difference the genie could not be put back in the bottle. We are given a choice: Right from wrong. It only makes sense that if God dwells in each of us, we are both witness and judge of ourselves. Our works follow us and we must learn from our mistakes in the here and now.

A cause to remember God's covenants with man. These are specifically named as perpetual ordinances. Memorials are eternal and always reappear in the Book of Revelation. The Rainbow is a covenant sign made with Noah after the Flood. (Gen. 9:13-17. Rev. 4:3). When we see one we always stop and take notice. It is truly a marvel. Arkhitekton n. (Greek) ἀρχιτέκτων. The word "architect" comes from ἀρχι- "chief" and τέκτων  "builder." The God of the universe is thought of as an architect, the Chief Builder. The design of the Tabernacle was given to Moses with exact specifications, as if from the Mind of an Engineer. The plan for the Jewish temple and later Gothic cathedrals were designed after this same order from the original archetype. Beginning in Exodus 25:8, we find the elaborate pattern for the tabernacle, "according to all that I show thee."

The Tables of the Law.

The unchanging, eternal statutes written by God in solid rock. cf. Ex. 32:16. Rev. 11:18,19. The public display of the stone tables has become a contentious issue by thinking they represent sectarian religion. These laws were given for a good reason, they are imperative for any civil and well ordered society. We have all witnessed the tragic results of man's obstinate disregard for these ten simple rules of life.

But the ten commandments grew into 613 obscure rabbinical laws: A heavy load of traditions and man-made ordinances. 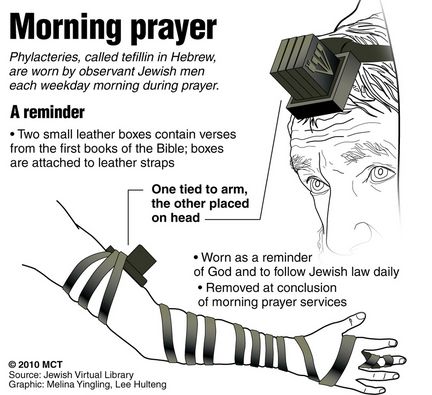 Only the priests knew what they all were, an unfair advantage over the people- bondage imposed by the ecclesiastical class. So Christ consolidated all the laws into just two, which covered everything:

Have you ever wondered, is there anybody out there who cares and understands?  Indeed there is.

"God, help me." Sometimes that's all it takes. Not lofty words. The Lord prayed, "Our father." We are not separated from God, you are talking to your Higher Self; the heart is the true temple. He listens to our prayers, knows when we hurt and what we need. St. Paul referred to "inner groaning," and he called God "Abba" or daddy. God understands all about us, after all He created you and I and the care of our soul is His responsibility. There is nothing you can do to win God's favor. He is Sovereign. Give thanks for everything, especially when you don't understand why things happen. Gratitude is important, even before the answer comes. It seldom comes the way we expect. Father knows best.

Israel (#3478 in Strong's Concordance*)  He will rule as God. Right towards God. This was the name Jacob was given marking his transformation at Peniel, "where he saw God face to face."  Genesis 32:27-30. (*There is no racial or ethnic connotation in the original meaning). Christ said a true Israelite  Is-real.  John 1:47.

Abram, a devout Hebrew of Chaldea, was contacted and told to take his wife Sarai, all his household and depart from Babylonia. To disrupt his life, drop everything and travel west. Because Abram never objected, complained or questioned the order, his faith is considered a type of righteousness; the standard set by his obedience. Sarai was barren, but in their old age, they had a son, Isaac. Isaac had a son Jacob. Jacob had twelve sons, and because his name was changed to Israel, these were the heads of the twelve tribes. The eleventh was Joseph, the one his father loved most, provoking jealousy among his brothers.

Joseph is symbolized by wheat. As a child, Joseph had a dream of eleven sheaths of wheat bowing before one: His brothers making obeisance to him. He went looking for them and found them tending sheep, telling them of his vision. They wanted to kill him, but the boy was thrown into a pit instead and left for dead, separated from his brethren. They told their father, Jacob, he was killed, showing him the coat of many colors smeared with animal blood. cf. Gen. 37:1-34. But Joseph was picked up by travelers and sold into slavery in Egypt. There he was tested and tempted, but no fault was found in this extraordinary young man with his exemplary attitude.

His prophetic boyhood dream came true many years later when Joseph rose to the powerful position of governor and deputy over wheat storage. When Canaan was swept by famine, Jacob sent his eleven sons to Egypt to purchase grain. They met with Joseph, unaware of who he was. But Joseph knew exactly who they were, and chose grace and forgiveness over revenge by providing grain without price for his starving family. cf. Gen. 45:3,4.

"It is I, Joseph!" Notice the emotions in the picture above: Joy, fear and remorse. Believing Joseph was dead and gone, he reveals his identity to his eleven brothers, the same ones who betrayed him as a child. With astonishing similarities, the beneficent and generous Joseph is the one Old Testament character most like Christ: Is-real.

So where did God come from?

The one question that doesn't compute.

Just know that God is and we are here.